PENNSYLVANIA 2022 TRAIL OF THE YEAR Delaware Canal State Park Towpath On September 9, 2022, the Friends of the Delaware Canal received the Trail of the Year Award from the Department of Conservation and Natural Resources. The timing for this recognitio …

Summer 2022 Newsletter features an article on the anatomy of the Delaware Canal and short bios of people who have made an impact on the preservation and protection of the Canal. 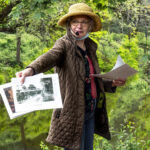 A Season of Change

As the seasons change, the Friends are changing as well. We said farewell to our beloved Executive Director, Susan Taylor, who retired in July. Her fierce advocacy and tireless devotion to the Friends of the Delaware Canal and the waterway we serve spanned three decades. 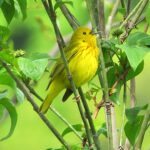 Zoom meetings, webinars, a YouTube channel. The Friends have been changing their storytelling game since March 2020 when we held our last in-person public program. Want to help? We could use someone who is relatively experienced and enthusiastic about making “informal” videos. 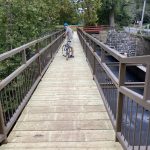 After delays and a number of issues, repairs to the Tinicum Aqueduct, its walls and banks are complete. Rewatering the Canal is a complicated task requiring an understanding of past and present conditions, skill, timing, and more than a little bit of luck. 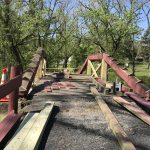 Extensive repair work on the historic Thompson-Neely Camelback Bridge that crosses the Delaware Canal in the northern section of Washington Crossing Historic Park has been completed. It’s one of six camelback bridges along the Canal that retain their authentic structure. 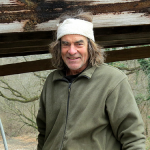 Contributions flew in after the Friends’ Annual Appeal letter you to help fund repair of the historic Thompson-Neely Camelback Bridge. The $5,000 matching challenge was met in a flash. To date, just over half of the $78,000 cost of the bridge project has been raised. 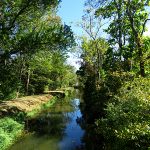 In spite of repair and maintenance work, Lehigh River water made it to Centre Bridge by late September, just three miles short of the Lock 11 goal. Late summer news about the Canal from New Hope south to Bristol Borough hasn’t been as good. 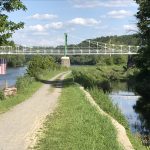 The major repair to the stone wall at Lock 20 south of Kintnersville has been completed, sinkholes have been filled, the Park maintenance staff has done some prism clearing, and there are no impediments to having the Lehigh River water flow down the Canal. Knock on wood! 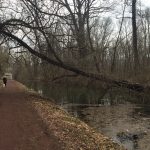 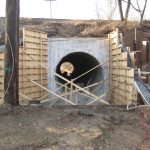 Endings at the Beginning of 2019

Three projects that have been on the books or in progress throughout 2018 will be complete before the first daffodils start to bloom this spring: a pedestrian passageway south of Morrisville, a new bridge over the Canal at Phillips’ Mill and the Centre Bridge Pump. 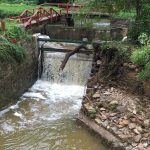 Lazy Summer Days - Not on the Canal

The summer of 2018 will be remembered for its seemingly unrelenting heat and its abundant rainfall that came down in torrents or tropical showers. The rain both helped and hurt the Canal. 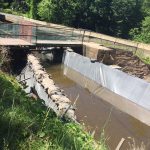 The Delaware Canal can be “challenging”, and, for the most part, 2018 has been a good illustration. Some projects, like the complicated Phillips’ Mill Bridge replacement, are making headway, yet the Canal is plagued by issues created by the season’s heavy storms. 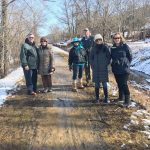 The Time Has Come

The red argillite stone surface of the Canal towpath is showing its age, deteriorating to dust leaving behind an earthen surface punctuated with holes, ruts, and humps. On a sunny day, walking and bicycling require watchfulness. On a rainy day, be prepared for mud and deep puddles. 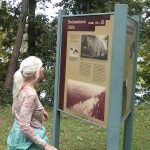 The Canal Gets Signs

Thanks to help from our Friends, four interpretive sign projects will move forward this year. Two involve replacement of sign panels that are the worse for wear after more than 20 years. The other two will create new signs so visitors can better understand what took place at special sites. 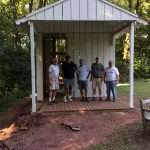 One can never say that dealing with the Delaware Canal is dull – especially this summer. As always, the Friends carry on – planning, implementing and helping, as friends do. 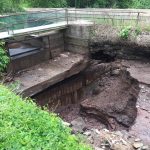 All of the sinkholes in the northern section of the park were plugged and repaired. We began re-watering the upper section of the Canal at the end of April, and by mid-May the Canal was watered from Easton to New Hope. This is the first time in years that this section has been completely watered. 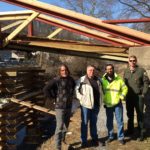 Woody’s Camelback Bridge is now the fifth of the six authentic camelback bridges to be restored. Randy did a masterful job! The work has been inspected and approved by the State engineers, and all that remains to be done is to stain the wood when it has aged a bit. 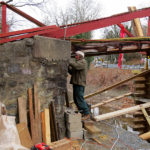 For over a decade, the Friends have been on a quest to ensure the last six camelback bridges are restored. Two of these genuine pieces of history are still in need of work – Woody’s Bridge south of Easton and Spahr’s Bridge in Bridgeton Township. 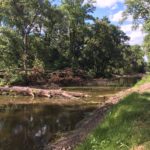 What a summer! It’s been hot, hot, hot, but that hasn’t stopped the action along the Delaware Canal. As always, from sinkholes and sidewalks to wall repairs, pumps and low water levels, the Friends endeavor to meet the Canal’s challenges – in a multitude of ways. One major milestone is the nearly complete reconstruction of the Redfield Bridge just north of Centre Bridge. 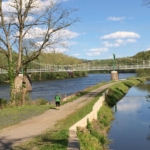 The days of May were glorious along the Delaware Canal. In Easton, the abundant water being fed from the Lehigh River filled the Canal all the way south to the Virginia Forrest Recreation Area. 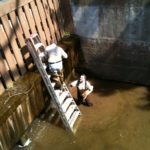 In the Continuing Saga

Endings, beginnings, and continuations are all part of this spring’s Delaware Canal news. Fortunately, there is much to report regarding project completions thanks to our generally temperate winter. 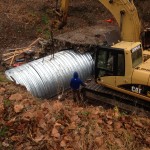 The State of the Canal

Several projects are underway and nearing completion including the High Falls Creek Culvert replacement, the Centre Bridge Pump, the Airport Road Culvert replacement. The Friends are expressing opposition to the current development plans for the site where Odette’s now stands. 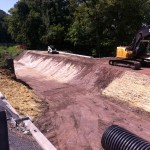 Cantankerous would be a good adjective to describe the Delaware Canal this summer, but the arrival of September has brought welcome improvement and progress. From a towpath bank collapse in the north to low water levels in the south, here is the Canal’s story. 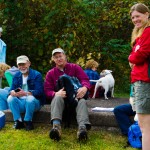 We carry on as two structures fail – the stone arch culvert that carries High Falls Creek under the Canal collapsed, and a section of berm-side stone wall gave way near the David Library of the American Revolution in Washington Crossing. 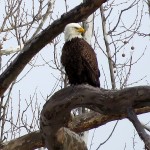 Shake off the last of the cold and grey of winter past. Get back out on the Canal – walk, bike, run, bird watch, fish, whatever you please… You can also get the satisfaction of making the Canal a safer, more pleasant place to visit. The Friends have three ways that you can help. 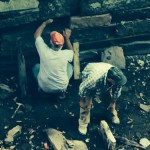 Thank You So Much!

The New Year is off to a great start thanks to all of you who so generously responded to the Friends’ Year-End Appeal. We asked you to help us do more in 2015, and you did just that. Your contributions have certainly helped to replenish the Canal Improvement Fund.

The Water is Flowing – The Work is Ongoing

The Pieces are Falling Into Place

Sprucing Up the Neighborhood and the Canal

Helping on Canal Clean-up Day is just one way you can get involved and help to restore, preserve and improve the Delaware Canal. Big or small, the perfect job for you awaits – all you need to do is get involved! END_OF_DOCUMENT_TOKEN_TO_BE_REPLACED