Beginning tomorrow, February 1, a major portion of the Nockamixon Cliffs area of the park will be closed to all activity, including ice climbing. Visitors to the area may still park in the roadside lots and use the towpath as normal. Closed areas are posted with signage. 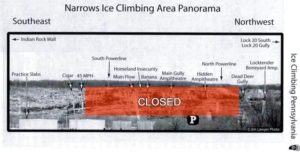 Public cooperation is much appreciated during this closure, which first began in 2016. Since then, the cliffs have been closed annually between Feb 1 and July 31.
As a reminder, the Nockamixon Cliffs are a designated Natural Area. This special designation is an area within a state park of unique scenic, geologic, or ecological value which will be maintained in a natural condition by allowing physical and biological processes to operate usually without direct human intervention. Title 17 Chapter 17, (Conservation and Natural Resources) of the Pennsylvania Code provides some additional information on the designation and administration of these lands. Ice climbing is allowed when conditions permit, outside of the closure time frame. During the closure, some established climbing routes on either end of the closed area will remain open, including “Dead Deer Gully” and “45 MPH”.
If there are any questions, please call the park office at 610-982-5560.

TOWPATH CLOSURE *(MM 17.8)* – The towpath will be closed under the Route 532 Bridge (MM 17.8) starting Tuesday 12/20/22 until further notice. The purpose of this closure is for PUBLIC SAFETY due to heavy damage to the bridge railing, which is precariously hanging over the towpath. Trail users should turn around at the closure and NOT attempt to get by it.

The towpath will be closed at Bridge Street in Morrisville between mile markers 9 – 10 starting Monday 08/01/22 until further notice due to construction. The purpose of this closure is for PUBLIC SAFETY due to construction activity. Trail users should turn around at the closure and NOT attempt to get by it.

The new shared-use path and complex were unveiled on Thursday, November 16th.  The path connects Lower Makefield on the Pennsylvania side with Ewing in New Jersey.  The complex includes a 127-space park-n-ride lot located at the intersection of Taylorsville and Woodside roads in Lower Makefield as well as a comfort station housed in a restored stone structure that dates back to 1799. Bridge and trail ramp connections can accommodate pedestrians as well as cyclists and are ADA compliant.  The new shared-use path improves access to the Delaware Canal towpath in Pennsylvania and the D & R Feeder Canal towpath in New Jersey, creating an additional loop trail for residents and visitors to enjoy.  There are four overlook locations on the span to encourage all to take in the scenery.  This project was funded by the Delaware River Joint Toll Bridge Commission.

The towpath is closed at Dark Hollow Waste Gate in New Hope (mile marker 24.15) until further notice. Dredging is taking place to remove wood and rock debris for better ease of water flow during future rain events. For additional information you can contact the Delaware Canal State Park office at 610-982-5560.

In the area of Lumberville, the towpath is CLOSED at the Lumberville Aqueduct Pedestrian Bridge. The purpose of this closure is for PUBLIC SAFETY and will be in effect until the crossing can be made safe. Trail users should turn around at the closure and NOT attempt to get by it. The aqueduct and associated pedestrian crossing sustained significant damages during Tropical Storm Ida to include the loss of a structural pier beneath the aqueduct.

If you plan to use the towpath be sure to use extreme caution due to damages sustained from Hurricane Ida. It is highly advised that visitors avoid the section of towpath between Easton (MP 58.89) and Point Pleasant, Lock 14 (MP 32.3). There are downed trees and debris along the entire length of the towpath. The towpath is closed in the area of Upper Black Eddy (MP 43) due to a bank collapse and washout to the river.  Areas of SR 611 and River Road (RT 32) are washed out leaving areas inaccessible. The Day Use Recreation Areas at Theodore Roosevelt (MP 53.1) will remain closed due to ongoing cleanup efforts. Heed all signs for road and towpath closures. Traveling by car near the park may be difficult to navigate.

If you plan to go to Ralph Stover State Park this weekend, use caution on trails. There will be limited parking due to parking lot washouts.

Update August 6, 2021: All storm cleanup efforts in this section have been completed.

The Park maintenance crew has been hard at work and has cleared 9 trees from the towpath in the sections between New Hope and Bowman’s Hill.  The towpath has reopened, however additional cleanup is still needed into the week of 8/2.  Please note the possibility that additional blockages may be present in areas not yet discovered.

Delaware Canal Towpath Closure – Several trees have been downed due to storm damage in the area of Hew Hope Borough and Solebury Township, Mile Post 23.6 to Mile Post 23, the section between Waterview Condominiums and Bowman’s Hill.  Cleanup of the debris is expected to last into the week of 8/2.  Trail users are cautioned to avoid this section of trail until notice is removed.

New Hope, PA, July 26, 2021 – The Friends of the Delaware Canal (FODC) today announced that Michael D. Ginder has been appointed executive director of the organization. Susan Taylor has retired after 30 years in that role.

Brett Webber, president of the FODC, said, “The Friends of the Delaware Canal is excited about Michael’s appointment. We look forward to working with him and building on Susan’s many accomplishments.”

“The Canal is such a vital part of our region’s history, and I am fortunate to have the opportunity to join the Friends as the next executive director,” said Ginder. “It will be exciting to work with the passionate individuals who are stewards of the canal, expanding our membership base, and encouraging area residents and visitors to spend time along the Canal.”

Ginder, a New Hope resident, was previously director of Business and Employment Services for the Arc Mercer. He has also served as executive director of the Woodford Cedar Run Wildlife Refuge in Medford, NJ, where he was responsible for the strategic planning, financial well-being and fundraising for the organization.

FODC works in partnership with the State of Pennsylvania’s Department of Conservation and Natural Resources (DCNR) Bureau of State Parks and Delaware Canal State Park to undertake restoration projects that rescue significant Canal structures. FODC has restored five of the six historically authentic camelback bridges and is collaborating with the state to ensure an accurate restoration of Spahr’s Bridge in Upper Black Eddy, where work has already begun.

In 2022, FODC will mark the 40th anniversary of its founding in 1982 with plans underway to celebrate in communities along the entire length of the Canal. The Canal, which runs nearly 60 miles from Easton to Bristol, PA, is watched over by volunteer FODC canal tenders who inspect the towpaths, pick up trash, clear branches and report problems throughout the year.

The FODC mission is to sustain a unique link to the country’s national heritage, protect beautiful and diverse natural areas, provide recreational and educational opportunities and enable the Canal to serve as a community and economic asset.

MEDIA: You may download the entire press release and photo here. 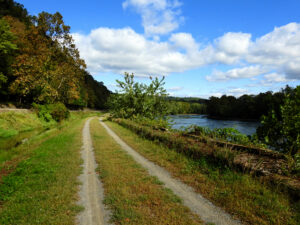 owpath Closure Tomorrow.
FRYS RUN AQUEDUCT TO MUELLERS GENERAL STORE (MILE 52.1 TO MILE 51.3 ): ON TUESDAY 6/8 The towpath will be CLOSED between Frys Run Aqueduct and Mueller’s General Store due to a required canal repair. Trail users should turn around at the closure and NOT attempt to get by it, as heavy equipment will be blocking the towpath during the repair. Repair is anticipated to be completed within one day.

Helping on Canal Clean-up Day is just one way you can get involved and help to restore, preserve and improve the Delaware Canal. Big or small, the perfect job for you awaits – all you need to do is get involved! END_OF_DOCUMENT_TOKEN_TO_BE_REPLACED