Moving Right Along
Thank you so much for your support!

The Friends’ Annual Appeal letter asked for your help in funding the repair of the historic Thompson-Neely Camelback Bridge, and help you did. Contributions flew in, many from supporters who had never before given to the annual appeal. The $5,000 matching challenge was met in a flash. To date, just over half of the $78,000 cost of the bridge project has been raised.

Based on this enthusiastic response and the advantages of undertaking the bridge repair this winter, the Friends’ Board of Directors voted to move forward with the work at its January meeting. The generosity of all those who contributed is very much appreciated.

Randall Myer, our experienced camelback bridge restoration expert from Lancaster County, has been given notice to proceed. By early February, the work site should be prepared and the wood on its way. Let’s hope the weather cooperates.

The project requires the placement of scaffolding in the canal prism, so that the bridge can be jacked up to allow the removal and replacement of deteriorated components. It’s a process that requires much more expertise, care and patience than simply replacing the structure. Preserving history deserves the effort.

It is anticipated that the bridge project will be well enough underway to allow a full head of water to flow through the area in mid-March, in time for the Canal to be stocked with trout. Since the Thompson-Neely Camelback Bridge connects two portions of the northern section of Washington Crossing Historic Park, the repair project will be on full view.  Randy Myer, who does most of the work himself, is a wonder to watch, but please stay out of his way and respect the work site boundaries.

Later this year, after the new bridge members have had a chance to age, we will be asking for volunteers to apply traditional barn red stain. Get your brushes ready.

Three important steps have been taken to achieve the goal of supplying vital water to the southern end of the Canal during dry summer months.

The Friends have been working on the installation of a system that can be used to pump water out of the Delaware River and convey it into the Canal at the times when the river drops below the level of the New Hope inlet and the Canal is water-starved. The basic components are a large centrifugal pump, which the Friends purchased years ago, and piping to carry the pumped water to the Canal.

The basic components were the easy part of the project. Finding the right spot to place the system was a major hurdle. What piece of land was available where the distance between the River and the Canal wasn’t too great and the slope too high? What spot in the River is deep enough to operate a pump when the River is low? The sweet spot turned out to be at the northern end of Washington Crossing Historic Park North, which the PA Department of Conservation and Natural Resources now operates. All the site issues were satisfied, two state parks were working with each other, and the electrical service could be established within a pumping station that was no longer being operated, but still functional. Permissions, approvals, plans took their due time.

The steps completed within the last several months are:

To come are the construction of a path down to the River, so that the centrifugal pump can be placed and maintained, and then the installation of the pump and making the component parts operate.  This will be done in the spring when conditions are more conducive to working in the water.

As required by DCNR, the Friends of the Delaware Canal will be obligated to pay for the electricity used to power the pump. Analysis of Delaware River level records has led to the projection that the new pump will have to be operated about two months of the year at a cost of approximately $2500 per month.

We are looking forward to having the pump system become operational in the coming months, but are also hoping that just the right amount of rain falls over the seasons, so that use of the pump isn’t needed.

When it does become necessary to turn the pump on, we hope that you’ll agree that having water in the Canal is good for visitors, residents, critters,
and the canal structure itself and will help out with the electrical cost of getting water
in there.

To find out what’s happening with the Kleinhans and Tinicum Aqueduct projects and other undertakings, check out the Park Manager’s Report by Devin Buzard below.

2020 should be the year of completed projects and what could be better?

As the new year begins, I am pleased to be able to provide my first official Park Manager’s Report. A majority of my time spent so far has been dedicated to touring the Canal, and I have found that each new day over the past four months brings a new feature to discover with no end in sight. One of the most indispensable tools I have found during self-guided tours and during my daily work is a document titled “The Delaware Canal Landmark and Mileage Chart,” which is authored by  Peter Sperry and published by the Friends of Delaware Canal . It could be argued that I would be lost without this document.  It is just one example of the many great things that the Friends offer in support of the Canal, and I am grateful to have that support.

Here is an update on the multitude of construction and preventative maintenance projects that are in various states of progress:

Both large projects are scheduled to be completed this summer.

The Department of General Services (DGS) Twelve Bridge project is moving forward with Phase 1 design nearing completion.  This phase includes replacement plans for Smithtown Bridge 4, Canal Lane Bridge in Upper Black Eddy, Smithtown Bridge 3, and the Raubsville sub-canal culvert. Upon finalization of the design documents , this phase can be scheduled for bidding.

A preventative maintenance project for Rodges Run sub canal culvert was awarded to Workforce Construction in mid-November. The work will begin post winter season with a deadline of May 31 to complete the project.

The replacement of the drop gate at Groundhog Lock (Lock 22/23) was sent out for solicitation on January 8 with a closing date of January 29. The goal is to have this drop gate replaced as soon as possible as the water cannot be restored north of this lock until the replacement is installed.

Residents and visitors to the northern section of the Canal may have noticed a reduction in mowing towards the Fall of 2019. This was due to the loss of the Park’s boom mower. This mower is the only piece of equipment capable of handling the vegetative growth on the road side of the canal and anything lower than two to three feet on the towpath side. I am now happy to report that we are anticipating the delivery of a new boom mower within the next month, which means the Spring mowing schedules should return to normal.

I am looking forward to the coming months and hopeful for the timely return of water to the Canal as these important projects are completed.

The latest update to the Delaware Canal Landmark and Mileage Chart, Edition 6, was added to the Friends’ website on January  17. You can find the chart by clicking on “The Canal” and then “Maps”, or go directly to the PDF. It’s an invaluable  tool, and Peter Sperry deserves much credit for keeping it current.

THANK YOU SO MUCH! 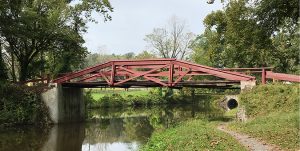 The response to our Year-End Appeal to fund the Thompson-Neely Camelback Bridge repairs was unprecedented. Your generous contributions help us to make great progress and are so very much appreciated.
Onward and upward!

These two photographs show the area around Locks 8 and 9 in New Hope in the early 1940’s.  Taken by Clarence R. Smith, these gems were shared with the Friends by his son, James Smith of Newtown.  Thanks to the Smiths, the history of the Delaware Canal continues to be revealed!

It’s a Hit – Puzzles are Sold Out

If you want an “Along the Delaware Canal” jigsaw puzzle, please buy it now before we run out. Since December 7, we’ve sold all 250 puzzles that we ordered. Fortunately, the manufacturer sent us extra, so we still have some to offer to those who didn’t get theirs during the holidays.

The 500-piece puzzle when pieced together is 23.5 X 18 inches and is made in Kansas City, Missouri. The cost per puzzle is $20 plus $1.20
PA sales tax and the proceeds benefit the Friends’ improvement efforts.

To purchase a puzzle on-line, go to fodc.org/join-donate/jigsaw-puzzle.
They will also be available at Friends’ events.

In the Friends’ mail arrived evidence that people have been taking care of the Canal for a long time. Richard A. Rook, Jr. of Wilmington, NC sent his three Boy Scout patches along with
this note.

“These patches I earned as a Scout and a Scoutmaster and are from the 1960’s and the 1970’s. Most years, the Boy Scouts of Bucks County would gather at the Canal for clean-up. The reason that one is red-tinted is because the patches were on my ‘brag rag’ (red felt coat) and got wet. I have always enjoyed the Delaware Canal both as a child and as an adult.”

Thank you, Mr. Rook, for sharing your story and contributing your patches. They are great reminders of the important roles that people have played in the preservation of the Delaware Canal.

At the Board Table

During our Annual Meeting on November 12 at Phillips’ Mill, several actions were taken concerning the Friends’ Board of Directors. The membership re-elected Jeff Connell, Laure Duval, Larry Reinfeld, Peter Rosswaag, and Brett Webber to additional two-year terms. Honored for their dedicated service as Board members were Eileen O’Neil and Bob Ketler.

Ideas and action were Eileen’s fortes. Her ready smile and persuasive manner made many a discussion and undertaking much easier. Wielding a paintbrush comes naturally, be it to paint a bridge or on canvas.

Bob Ketler ended his second stint on the Board. As an engineer and construction manager, he had valuable insights to provide regarding the condition of the Canal and projects undertaken by both the Friends and DCNR. 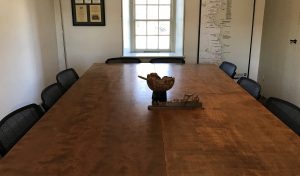 The Board looks forward to a productive 2020 and always welcomes your questions, input and help!

And about the Board Table itself…

When the Friends took up residence at the Locktender’s House in New Hope in 1992, it had no furniture, just a LOT of bobby pins caught in the cracks of the floorboards in what was to become the Boardroom. Dorsey Reading, the craftsman and custom builder from Erwinna, was on the Board at the time. Since every Board needs a table, Dorsey took on the project of building a new one for the Friends’ new headquarters. One day, he arrived with a handsome wooden table and managed to get it up the winding stairs. The table, which accommodates 12 nicely, has graced the room ever since. Board members and myriads of others have sat around a custom Dorsey Reading table. Certainly a distinction.

Helping on Canal Clean-up Day is just one way you can get involved and help to restore, preserve and improve the Delaware Canal. Big or small, the perfect job for you awaits – all you need to do is get involved! END_OF_DOCUMENT_TOKEN_TO_BE_REPLACED