When the Commonwealth of Pennsylvania dug the 58.9-mile-long Delaware Canal between 1827 and 1831, it was responsible for connecting the private properties that the new ditch divided. Thus, more than 100 bridges were built, most of which were camelback bridges. A camelback bridge is a modified Queen Post Truss bridge, perfectly adapted for canal use since it has a hump in the middle, which allowed canal boats to more easily pass underneath.

Today the successors to the original camelback bridges are the Delaware Canal’s signature structures exemplifying the waterway’s history. Over the years, changes in vehicle types and traffic requirements have caused most of the bridge to be replaced with larger, hefty versions, but six authentic camelbacks still remain.

For over a decade, the Friends have been on a quest to ensure that these last six genuine pieces of history are restored. Not only are they vital factors to the Canal’s National Historic Landmark status, but their delicate design guides new construction. The Friends are directly responsible for the successful restoration of three of the camelbacks and were instrumental in the preservation of the fourth. Our volunteers perform continuing maintenance, such as painting and vegetation removal.

Two camelbacks are still in need of work – Woody’s Bridge south of Easton and Spahr’s Bridge in Bridgeton Township. This fall, the stars aligned in favor of Woody’s. It needed significant repairs so that it could continue to carry pedestrians, but was not so deteriorated that it needed a complete rebuild.

The Friends have partnered with the Delaware Canal State Park to get the job done now while the water is out of the Canal for other maintenance projects. Fundraising to cover the $31,800 labor cost is underway, and the Park has committed to pay for the materials. In the spirit of getting the job done this winter, Randy Myer of R-Shell Exteriors, Lancaster, PA is already at work. (Randy is a seasoned camelback restoration contractor having already completed the work on the Hazzard’s, Thompson-Neely, and Goat Farm bridges.)

So far, the Friends have raised $20,000 for this project thanks to generous contributors who want the Canal’s history preserved. Now we need your help to raise the balance of the needed funds. You may contribute on-line at www.fodc.org or send a check to Friends of the Delaware Canal, 145 South Main Street, New Hope, PA.

Please help restore Woody’s Bridge, the best example of how camelback bridges once were – delicate, graceful, utilitarian, and very beautiful.

The Friends’ Canal Action Team (CAT) has been tackling a wide variety of projects since it was formed in the winter of 2014. Everything from removing vegetation from stone walls to bridge painting to replacing interpretive signs to pulling out cattails is fair game.

WHO: Anyone who wants to and can be physically active. Especially needed are people who like to paint bridges and those who would like to lead a crew.

When: CAT projects can be undertaken both on weekdays and weekends. Usually they take no longer than 3-4 hours.

Where: Work sites are determined by the urgency of the job and the location and number of available volunteers.

The Plan: If you want to be part of CAT, please call 215-862-2021 or e-mail friends@fodc.org and give us your contact info and your preferred work locations (north, central, south). When a work day is developed, an e-mail notice containing the job details is sent to all the prospective volunteers about two weeks prior. Those who can help on a particular project just respond to the e-mail and show up on the appointed day. 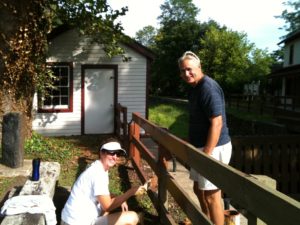 Be part of CAT! Get things done along the Canal and enjoy working with your fellow Friends.

My first seven months at the Canal have been exciting and full of challenges and successes. We wrapped up 2016 with several wall repair projects. During the maintenance drawdown in October we hired several contractors to make repairs to multiple walls that failed and collapsed along the Canal. Wall repairs have been completed at Lock 5 in Yardley, along Mile Post 21 in the Bowman’s Hill area, adjacent to Lock 22/23 in the Teddy Roosevelt Recreation Area, and at Woody’s Bridge in the Raubsville area. Also during the drawdown, Park and engineering staff were able to inspect several areas of the Canal and develop plans for future projects and maintenance work. Park maintenance crews were also busy repointing walls and waste gates, dredging, fixing additional sink holes ,and working on many other preventative maintenance projects. To close out 2016, the river/weather finally cooperated with us by providing enough rain and higher river levels to start re-watering the southern end of the canal during the middle of December.

2017 will bring its challenges and successes as well. We will be starting the New Year with several projects already in progress. First, in partnership with the Friends, an experienced contractor has been hired to make repairs to Woody’s Bridge in the Raubsville area. We have had another wall collapse in the Kintnersville area by Lehnenberg Road. A contractor has already been mobilized, and repairs to this wall have begun. Finally, the Park has discovered two new sinkholes in the northern section of the Park – one in Smithtown between Bridges 2 and 3 and the second in Williams Township just north of the Easton sewage treatment plant. Repairs to these sinkholes will be forthcoming once the weather decides to cooperate with us.

Also, work on the Lower Limeport Bridge in Solebury Township has begun and is expected to continue through April. We have another bridge project on the horizon as well. The final design work and permitting is being done for the Phillips’ Mill Bridge. We are expecting this project to go out to bid late this winter and to be ready for construction later this spring. Enjoy the Canal!

At the Annual Meeting

Our members just kept coming through the doors of the David Library of the American Revolution on November 15. The Rose Gallery, where the covered dish dinner was held, was filled with people and great food; and everyone was thankful for the spacious seating and high quality audio visual equipment upstairs in Stone Hall where our presentations were held. We are so appreciative of the Library’s willingness to share their facilities with the Friends.

We were pleased to have a wonderful turnout from the PA Department of Conservation and Natural Resources. With us were:

John Hallas, Director of the Bureau of State Parks, who gave a summary of DCNR’s accomplishments and plans
Jason Zimmerman, Manager of Park Region 4
Josh Swartley, Delaware Canal State Park Manager
Bethany Hare, Delaware Canal State Park Assistant Manager
Gene Gelfand, Engineer with DCNR’s Bureau of Facility Design and Construction, who was honored for his dedication to the preservation and improvement of the Canal and its historic structures, particularly its camelback bridges
David Kemmerer, retired Director of the Bureau of State Parks

The after-dinner presentation included some Friends’ Board of Directors business. Retiring Board member Stephanie Garomon was thanked for all her efforts on behalf of our organization, especially in terms of organizing fundraising events. Pam Can, Judy Franlin, Joan Fullerton, Lynn Vogel, and David Scheaffer were all elected to additional Board terms.

The Annual Meeting is always a great time to get together with old and new friends, take stock of the year’s activities, and gear up for the coming year. And that’s just what we did.

At its January meeting, the Friends’ Board of Directors elected its officers for 2017. Serving will be:

As always, the Board welcomes your participation and input.

A Link to the Canal’s Past

Movies taken of the Delaware Canal during the first half of the 20th century and interviews with men and women who worked on the Canal are now available for you to see and hear on your computer, iPad, or phone. These treasures are easily accessible thanks to the efforts of the Solebury Township Historical Society and the cooperation of the National Canal Museum in Easton.

Two members of the Society, who are also dedicated members of the Friends of the Delaware Canal, collaborated with the National Canal Museum to preserve the Museum’s cassette and film collection. Robert McEwan, Society Vice President and archivist, and Elizabeth Carrick, the Society’s web consultant have devoted a tremendous number of hours to evaluating the collection and publishing the best of it on the Solebury Township Historical Society website www.soleburyhistory.org.

To share these valuable pieces of history with more canallers, the Society has very generously invited the Friends to place a link to the material on our website www.fodc.org. The movies and the interviews can be found here.

So, if you’ve wondered what the Delaware Canal was like when mule teams pulled coal-laden boats to market, you can now find out by just clicking.

Helping on Canal Clean-up Day is just one way you can get involved and help to restore, preserve and improve the Delaware Canal. Big or small, the perfect job for you awaits – all you need to do is get involved! END_OF_DOCUMENT_TOKEN_TO_BE_REPLACED