The level of the Canal has been dropped from Easton to Erwinna because a very large hole developed in the Canal in Raubsville.  The repair of the hole with flowable fill is scheduled for the week of June 7.

Towpath Closed in Raubsville Due to Collapse

The towpath is CLOSED just north of Woody’s Camelback Bridge ( Mile 54) due to a partial collapse of the towpath today. Trail users should turn around at the closure and NOT attempt to get by it, as the collapse may be prone to expanding and undercutting.  The level of the water in the Canal has been lowered to reduce any further erosion.

Update on the Fry’s Run aka Kleinhans Aqueduct Situation

On Saturday, August 11, 2018  Williams Township (Northampton County) experience torrential downpours and flash flooding.  As a result of this flooding Fry’s Run overflowed its banks, sending a wall of water into Kleinhans Aqueduct.  The flash flooding damage the aqueduct and the temporary bypass that carries water along the canal.  The aqueduct wall on the west side was completely blown off and washed down the canal.  The temporary bypass, that conveys water through the canal, was washed away.  Currently, water is being diverted out of the canal at Theodore Roosevelt Recreation Area (TRRA) until repairs can be made to the aqueduct.  The area between TRRA and Durham will have no flow until repairs can be made.  The Durham pump has been turned on, so the area south of Durham will have a minimal amount of water on a short term, temporary basis.  Over the next several days, we will be working on installing another temporary bypass over the aqueduct and hope to have water flowing through the area by the end of next week. 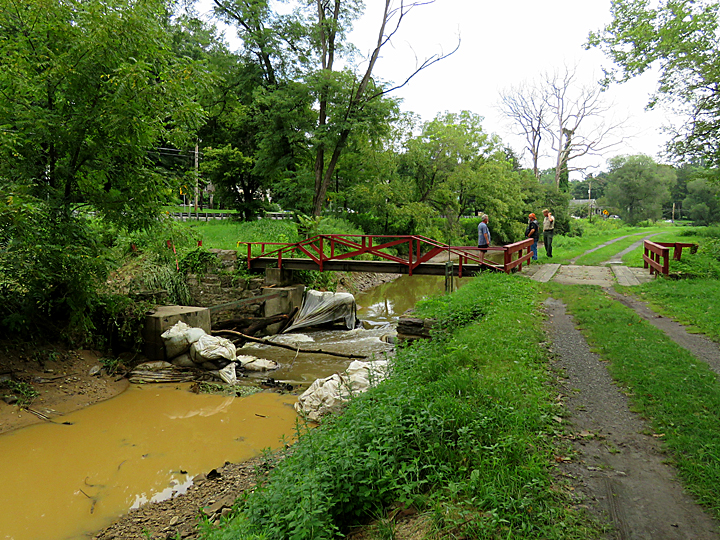 On Saturday, August 11th, it RAINED in the upper stretches of the Canal causing local flooding. Fry’s Run near Raubsville rose to a level higher than the canal aqueduct, and the tremendous force of the water against the temporary pipes, which were carrying the Canal’s water over the Run, were ripped out of place – as well as stone walls and some River bank.
The result is that most of the water coming south from Easton is pouring out the west side of what remains of the aqueduct structure. Water levels have dropped from Groundhog Lock south.
Hope to know more soon about the way forward. This turn of events is especially sad since

DCNR took great pains to install the pipes so that the Canal could be watered until the structurally deficient aqueduct was replaced. Fortunately, the plans for the new aqueduct are finished, so the replacement process is underway.

Several additional sinkholes were discovered in canal prism between Raubsville and Easton.  The state engineers and Bi-State Construction have investigated.  They will be fixed, but rewatering of the Canal will be delayed a few weeks.

Water level in the Canal will be lowered in several areas of Delaware Canal State Park beginning on Monday, September 26. The drawdown will allow for preventive maintenance, inspections and several small repair projects. Large stretches of the Canal will have low water levels until work is completed. It is anticipated that rewatering will begin on November 1.

Areas affected will include:

The full text of the announcement from Joshua S. Swartley, Park Manager, is below:

Delaware Canal State Park is planning for a maintenance drawdown of the canal beginning on September 26, 2016. The canal will be drawn down in multiple sections of the park to perform preventative maintenance, inspections, and to complete several small repair projects.

Drawdown of the canal must take place between July 15th and October 1st, due to the regulations established by the Pennsylvania Fish and Boat Commission to protect the imperiled eastern redbelly turtle. During the drawdown period, park staff will be on site to remove and relocate any turtles, fish, and other species of concern to a safe location should they become stranded in a section of the canal with low water.

If you have any questions or would like additional information about the planned drawdown of the canal please contact the park office for assistance.

Helping on Canal Clean-up Day is just one way you can get involved and help to restore, preserve and improve the Delaware Canal. Big or small, the perfect job for you awaits – all you need to do is get involved! END_OF_DOCUMENT_TOKEN_TO_BE_REPLACED