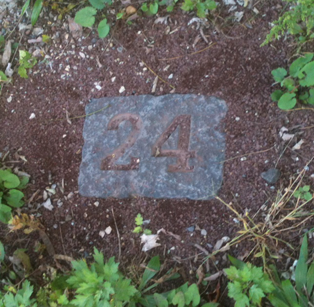 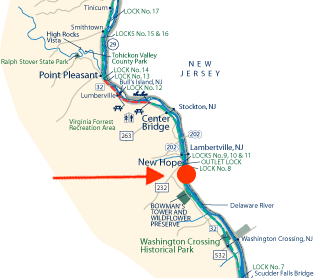 Are We There Yet?The Delaware Canal State Park is unusual because it is long and narrow. It’s typically 60 feet wide, which includes a 12-foot-wide towpath, 40-foot-wide waterway, and 8-foot-wide berm bank. And, you’ve probably heard that it is 60-miles-long. Well, that’s wrong, even though “60-miles-long and 60-feet-wide” does have a nice ring to it.

The Delaware Canal is 58.899 miles long, according to the official 1964 survey, with Mile 0 now located out in the Delaware River in Bristol and Mile 58.899 located at the Guard Lock at the Lehigh River in Easton. And there are so many miles in between.

When you’re out on a trail, it’s always good to know where you are in relationship to what. The Friends of the Delaware Canal have undertaken several projects to make it easier to find your way along the Canal.

Peter Sperry, a Friends’ Board member, used the 1964 survey maps to create an inventory of canal structures, access areas, parking spots, roads, and other landmarks. With this information, he formulated the Delaware Canal Landmark and Mileage Chart. This chart positions the inventory items according to both their precise mileage from Bristol and their geographic coordinates, which can then interface with GPS enabled devices and mapping tools, such as Google Earth.

This frequently updated chart is an accurate and invaluable tool to use in planning your visit to the Canal, to learn more about the Canal’s resources, or just to satisfy your curiosity about how far it is from one place to another. 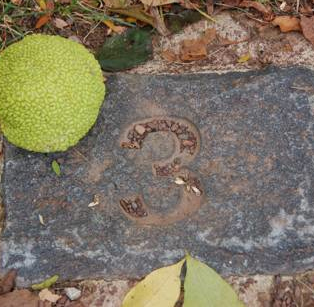 Using the Landmarks and Mileage Chart as a basis, Pete Sperry led a second Friends’ project – the creation of a system of markers that indicate the miles along the towpath. Great thought was put into what type of marker to use, and the decision was made to use black granite markers embedded in concrete set flush with the level of the ground so that they would not be a maintenance problem. The specific mile number was carved into each granite block.

Friends’ members and supporters enthusiastically contributed to a “Buy a Marker” program and all 59 markers were quickly claimed, many in memory or honor of family, friends, and Canal volunteers.

Pete and his hardy band of volunteers installed the markers over time. The floods of 2004, 2005, and  2006 were no help, and some markers had to be reinstalled after the flood repair work. All are in place now thanks to the hard work of the “We’ve Made Our Mark” crew.

Helping on Canal Clean-up Day is just one way you can get involved and help to restore, preserve and improve the Delaware Canal. Big or small, the perfect job for you awaits – all you need to do is get involved! END_OF_DOCUMENT_TOKEN_TO_BE_REPLACED