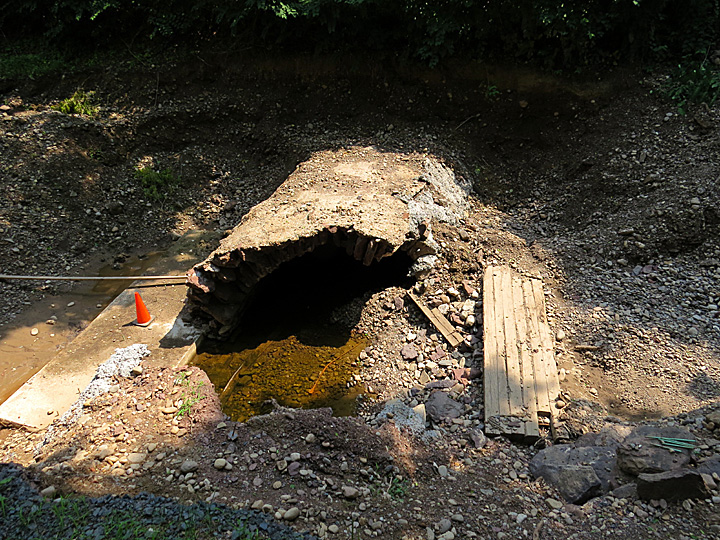 Bi-State Construction soon will be mobilizing at the site of the High Falls Creek culvert collapse in Upper Black Eddy.

Bi-State anticipates delivery of the liner by the end of November.

Sleeving the entire length of the High Falls Creek culvert is expected to serve as a permanent repair. 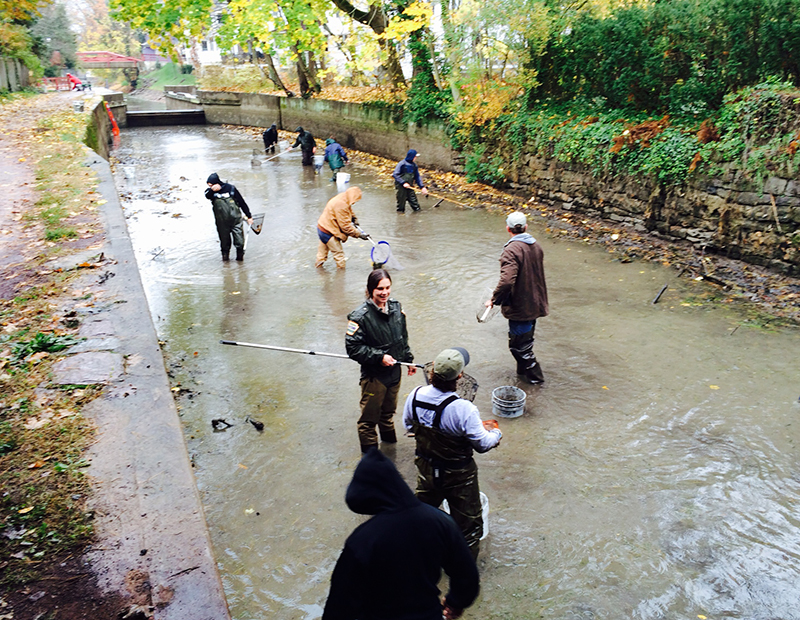 Thousands of fish were rescued from the Canal in Centre Bridge and New Hope over the past several days. Wader-clad volunteers and Delaware Canal State Park staff climbed into the Canal with their nets to scoop out fish – tiny to large – that were trapped by the diminishing water level caused by the broken pump at Centre Bridge. A new pump is on order.

The pump that supplies water from Centre Bridge to Lock 11 in New Hope has broken down. Repair/replacement options are being evaluated.

“The community, rightfully so, was alarmed by the intrusion into the park,” said Maya van Rossum, Delaware Riverkeeper.

“It shows people what they’re in for, the intrusion into their lives and places,” should the approximately 108-mile natural gas pipeline go through, van Rossum said Thursday in a phone interview.

The drilling operations are part of a process required by the Pennsylvania Department of Conservation and Natural Resources, said Gretchen Leslie, a spokeswoman for the agency.

Because PennEast needs a right-of-way to cross state parkland, DCNR requires the pipeline company to conduct a geotechnical survey, Leslie said. The core drilling associated with the survey is done, she added.

Pat Kornick, a PennEast spokeswoman, said the company was authorized to conduct the drilling as part of the DCNR regulatory process.

Concerns that the survey violated Gov. Tom Wolf’s moratorium on gas drilling in state parks were unfounded, according to Leslie.

The moratorium, adopted in January, prohibits gas drilling but that does not apply to a pipeline, she said.

Durham manager Joe Kulick said the township recently filed to intervene in PennEast’s application with the Federal Energy Regulatory Commission, which has authority over pipelines.

As an intervenor, the township is notified of all activity involving the pipeline. It can also address concerns directly to FERC.

Durham has asked the regulatory agency for a moratorium on all pipeline permits involving the township until PennEast addresses concerns about Durham’s limestone geology and a shooting range that is in proximity to the pipeline’s proposed route, said Kulick.

Plans call for pipeline construction, if approved, to begin the in spring of 2017.

Helping on Canal Clean-up Day is just one way you can get involved and help to restore, preserve and improve the Delaware Canal. Big or small, the perfect job for you awaits – all you need to do is get involved! END_OF_DOCUMENT_TOKEN_TO_BE_REPLACED