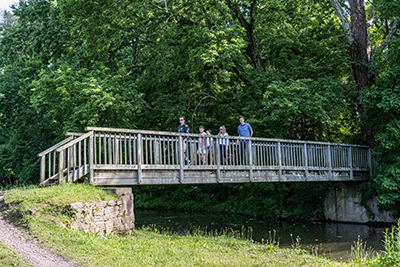 Help raise funds to replace the aging wooden footbridge with a long-lasting, site-sensitive metal bridge. The Mary Yardley Footbridge connects the Canal towpath at Fuld Avenue in Yardley Borough with a footpath to North Main Street.

Thank you! You will receive your transaction receipt via email.

A Link to Yardley Borough’s Past and Future

The original metal footbridge was built over 100 years ago and named for Mary Yardley, the adjacent property owner.

The footbridge and bridge path were used to connect Main Street and the Rivermawr neighborhood, providing residents access to the trolley that ran along North Main Street. Rivermawr was a summer retreat for people wanting to escape the urban environment in the early 1900’s. At that time, automobiles were a luxury, so many residents relied on the trolley and railroad as their primary means of transportation.

After more than 70 years of use, the metal footbridge was replaced in the 1980’s with a wooden one which now needs to be replaced. The current 40-year-old foot bridge is primarily used for recreational purposes, providing access to the canal towpath for cycling, walking, running and dog walking.

As the northern-most bridge in the Borough, it connects residents to the town’s restaurants, shopping, and Yardley events, such as Harvest Day, Canaloween, Music on Main, and the Christmas and Memorial Day parades.

The footbridge is also an important alternate means of emergency access in the event of flooding in the river neighborhoods.

For over 100 years, the footbridge has retained historic significance as a link to Yardley Borough’s past. The original footbridge brought the Yardley community together in the early 20th century. Now, in the 21st century, it is time to honor its place in history and install a new site-sensitive metal footbridge to last for generations to come.

Friends of Mary Yardley Footbridge is a group of volunteer residents working to raise the funds necessary to remove and replace the current wooden footbridge that spans the Delaware Canal at Fuld Avenue. The project is a cooperative effort with the Friends of the Delaware Canal, the PA Department of Conservation and Natural Resources and Yardley Borough.

Helping on Canal Clean-up Day is just one way you can get involved and help to restore, preserve and improve the Delaware Canal. Big or small, the perfect job for you awaits – all you need to do is get involved! END_OF_DOCUMENT_TOKEN_TO_BE_REPLACED